Archive of posts with the Theme Updates topic

Today we’re proud to announce Make 1.8.6 and Make Plus 1.8.5! There are exciting features coming to both. Column rows, refreshed builder design and more! Here’s what’s new:

Make 1.8.5 is out and includes several small updates. Here’s what’s we fixed:

It’s time for a new release! After a huge refactor of Make and Make Plus in 1.8, we’re now doubling down on features. Here’s what’s new in 1.8.3:

As always, be sure to update Make together with Make Plus.

Today we released version 1.8.2 of Make and Make Plus. Back in version 1.8 we refactored our builder backend code, and 1.8.2 we’re patching up several little issues reported by makers. Here’s what’s included:

Today we released Make and Make Plus 1.7. As we mentioned in the beta announcement, it has a lot of big changes under the hood. It also has some great new features! Let’s take a look:

Instant style previews in the Customizer

In 1.7, Make now takes greater advantage of the “postMessage” feature of the Customizer to instantly update the Preview Pane when modifying a style-related theme setting. This includes all Typography, Color, and Background Image settings, as well as many others. Waiting for the preview pane to reload after every font size increment is now a thing of the past!

In previous versions of Make, you could choose to add icons for your social profiles via a simple form in the Customizer, or as a custom menu. The form was easy to use, but only a limited number of icons were available. The custom menu could accommodate a greater variety of icons, and had more flexibility, but it was not very intuitive to use. With Make 1.7, the two methods have been consolidated into one interface within the Customizer. Paste your social profile URL into the field and watch the icon appear instantly. Drag and drop the icons into any order you want. And with the Social Icons API, you can add even more icons to the list of 53 that are currently available.

Color and typography settings for buttons

Now you can customize the colors and fonts of built-in buttons (comment form, search) and Gravity Forms buttons from right in the Customizer.

Have you ever started a new Make site and gotten everything configured just the way you want it in the Customizer only to realize that there are a few more tweaks you need to make with a child theme? And then, when you activate the child theme, you realize that everything is back to the defaults in the Customizer, because WordPress treats it like an entirely separate theme? Well, we know from supporting our users that it happens a lot. Now when you have a child theme activated, there’s a new “Migrate Settings” entry in the Appearance menu where you can copy all those changes you made in the Customizer from the parent over to the child. Hallelujah!

With this oft-requested feature, you can choose to have either just the Header Bar or the entire site header remain fixed at the top as you scroll down the page.

The process of entering your kit ID and loading the contents of your kit into the list of available fonts has been significantly streamlined. Simply paste your ID into the field, and it will instantly test the kit and indicate whether the fonts loaded successfully. Then just head over to any Font Family dropdown and your fonts will be there!

Make Plus: Improved interface for post and page layout settings

We heard from a lot of people that the interface with “the double checkboxes” was confusing at best, so we changed it to be more intuitive.

New users can download Make 1.7 today. Make Plus users — make sure you’ve authorized your plugin to get one-click updates in your WordPress dashboard. 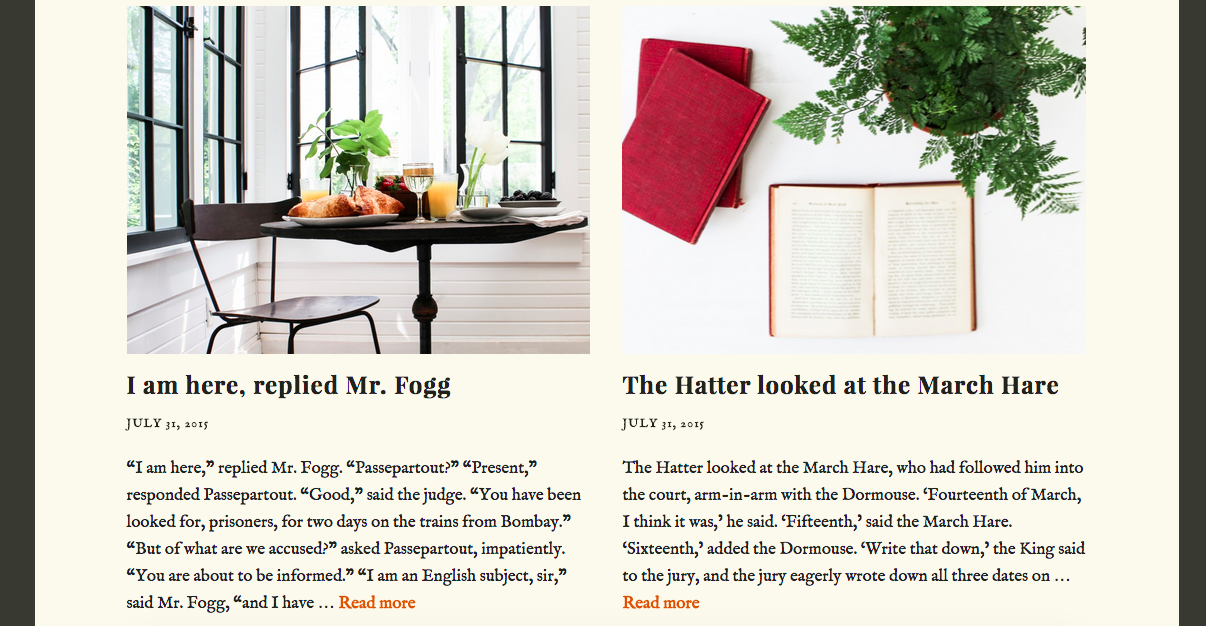 Just a quick note that last week we released Make Plus 1.6.2. Our primary goal for this update was to address some issues and improve the way the Posts List section works. 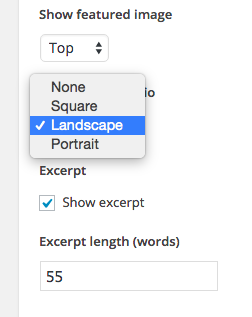 We made the Post List section a little easier to understand by cleaning up the UI and tweaking some of the labels.

You can now control the length of the excerpt of the post item output by adding a word count.

And you’ll see a “Read More” link has been added to the end of your excerpts. 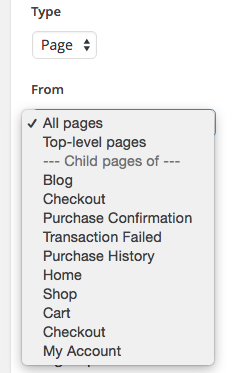 The ‘From’ control now displays different taxonomy options depending on the chosen post type.

And if the chosen post type is hierarchical, the ‘From’ control includes options to show the children of a specific page/post.

In addition to the Post List section tweaks, we’ve improved Typekit integration and adjusted the layout for controls in the Post List, Products, and Downloads Builder sections, and fixed a mobile issue with the accordion Panels as well as the layout settings for the sidebar in WooCommerce shop pages.

If you use these features in Make Plus, we look forward to your feedback. Expect Make 1.6.2 out shortly!

Today we’re excited to announce the release of Make & Make Plus 1.6.1 which adds additional customization options for section backgrounds in the Page Builder — including parallax effects. Take a look at the preview below to see this Make Plus update in action.

Make 1.6.1 adds background color and image to the different Builder sections — no custom CSS required (but if you want to add some anyway, do it on the fly with the section IDs and classes in Make Plus). 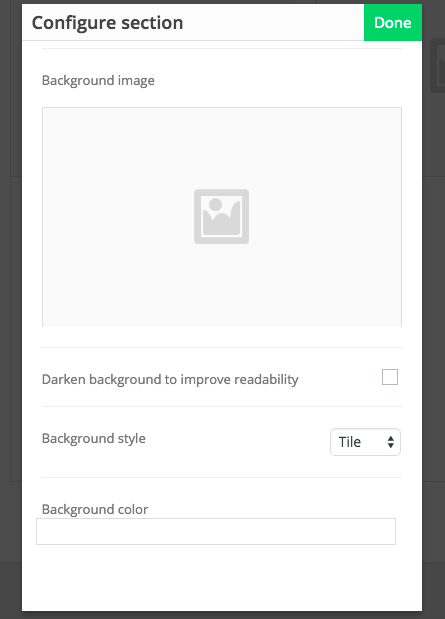 We’d love to see what you’re doing with the new features in Make & Make Plus, especially since the 1.6 release. Make sure to share your sites with us (drop us a note or use the hashtag #iusemake). 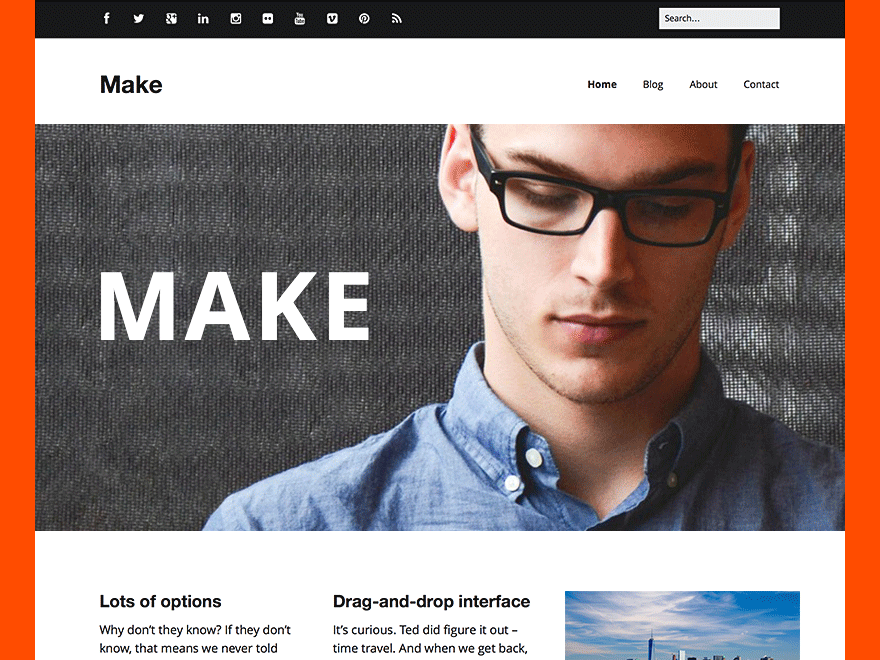 We’ve been really busy the past few months, and fresh off the heels of our latest one-off theme for photogs, Finder, we’re releasing an exciting update to Make Plus — including a new Builder section and fresh new features. Check out the full feature list or read on for what’s new in Make Plus 1.6.