Since I’m the community manager at The Theme Foundry and I can get to Philly in just a few hours and on one tank of gas, it made sense for me to attend the inaugural WordCamp event earlier this month.

If we’ve met in person, you know I’m pretty introverted. Conferences, and especially high-energy conferences, can take their toll. So instead of writing another standard #wcus recap, because I’m sure you’ve read a million of them by now (Learn Javascript, Deeply, right?), I’d like to offer some insight on how to find connection and value at WordCamp when you’re a hopeless introvert.

The view from my Instagram at #WCUS. That’s a lot of WordCampers!

Make friends with at least one person who knows everyone else.

While I’ve been involved with WordPress on the ancillary (as a writer, blogger, user, etc.) for years, I’m newer to the WordCamp scene. It’s awkward to go to an event alone and not know anyone though! What I’ve discovered about WordCamps in particular, is that there are always a few people there who actually make a concerted effort to notice those loners and reach out. Inspired by those connections I’ve made, I’ve decided to make a special effort in 2016 to introduce myself to anyone who seems to be struggling to find their footing at WordCamps.

So if you find yourself at a WordCamp I happen to be at, and you look lonely and lost, I’m going to find you. And I’m going to introduce you to that one person I know who knows everyone else.

Attend the talks that interest you, but don’t panic if you miss one (or six). 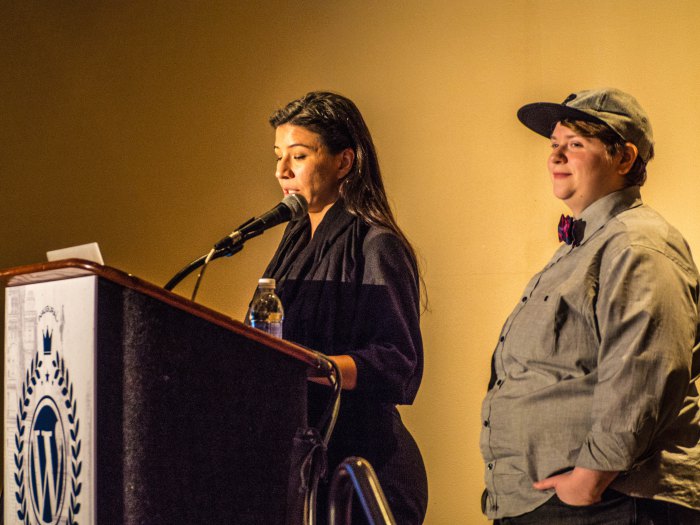 While at WordCamp US I attended a handful of really fabulous talks — and missed more than a handful because I was having fabulous conversations with other folks in the hall, dining room, and around town.

Just a few of the amazing talks I watched included:

What I learned when my blog post went viral – With humor and humility, Happiness Engineer and comedy writer Dennis Hong shared the pitfalls and rewards of accidentally creating viral content.

Open Source and Museums – My inner super-nerd was fascinated by the challenges Mel Choyce and Courtney OCallaghan overcame by embracing open-source culture, technology, and practices when faced with the task of digitizing the Freer and Sackler Galleries entire collection.

Teaching the next generation of WordPress bloggers and hackers – Charlie Reisinger shared an amazing talk about how he and his IT department at Penn Manor School District in Pennsylvania gave students a voice and a platform by choosing WordPress and other open-source technology. The results were nothing short of inspiring.

All the talks that I missed were recorded anyway, and I was able to catch up later (I’m still catching up). I get the FOMO that introverts sometimes struggle with — especially if you just need a quiet break. But it doesn’t have to be that way at WordCamp. While it’s awesome to support the amazing speakers who are innovating in WordPress, you shouldn’t pressure yourself to do ALL the things.

Approach the speakers (and developers, designers, community organizers, etc.) that you admire. Say thanks!

I tried to personally thank the speakers of all the talks I watched, though I missed a few. I also made sure to reach out to WordPress community members that I’ve interacted with on Twitter, in Slack, etc. People go to WordCamp to network, after all. I’ve learned through experience that a simple hello at a WordCamp can lead to business ideas, partnerships, brainstorming sessions, and professional development. Introducing yourself to strangers is hard! Make it easier by just saying, “I saw your talk and thought it was great! Thanks so much for that!”

Use this break from the confines of the desk to move your body! In fact, move all over Philly…

Sometimes reaching out and making friends leads to wacky misadventures. Like walking six miles across Philadelphia at night, experiencing falafel fail, and crashing sponsor after parties with fellow geeky developers (you know who you are! Let’s do it again next year!).

Omg #wcus after party with @Josh412 and @melissajohill. It's been epic. Thanks @wpengine! pic.twitter.com/U06JnEYzp9

Come ready for surprises. And bring extra bags for the surprises.

Almost every time I introduced myself as a member of The Theme Foundry team, I heard, “Oh! You guys built Make! I love that theme!” Which was super encouraging and exciting. The fact that The Theme Foundry is now synonymous with Make means we’re doing our jobs here. I’m going to work on getting more Makers at WordCamps and meetups in 2016 and if you end up going, I hope you’ll find me and say hello!

One of the differences between WordCamp US and the smaller WordCamps I’ve attended is how busy and crowded the sponsor hallway was. The sponsors really came all out, showing off their enthusiasm and knowledge of WordPress and really engaging the community. I learned a ton — especially about hosting, security, and the Automattic suite of products.

The swag haul alone could have filled another bag and I came home with nearly an entire wardrobe — shirts, hats, socks, and gloves. I’d like to challenge the 2016 sponsors to print up pants of some variety — leggings (my vote!) or sweats? — so I can be fully clothed in swag when I leave.

Notable promotions included the SiteGround Christmas socks and GoDaddy Pro commemorative coins that Michelle Schulp designed. I happened to pull a special black coin from the bag — for which I was rewarded a new Blue Yeti Microphone (was hoping to snag a GoPro to attach to my motorcycle! I’ll console myself by starting a podcast).

And finally, I was surprised by how much I ended up enjoying myself. It’s always difficult for me to venture outside my bubble. One reason I love our distributed team is that I don’t have to interact with the outside world. While the idea of attending a conference with a thousand other people, in a city I don’t know very well is scary, I was surprised by how quickly it is to find a rich and diverse community at WordCamp.

Tickets for WCUS 2016 are already available. Will I see you next year?