If you’re following along over on Github, expect to see commits going in on Wednesday and Thursday mornings. Right now the team is small: Lance and I are working on the code and chatting with Matt and Nacin as required over Skype. We may be small, but we’re more than happy to accept bug fixes and suggestions in the form of pull requests. In fact, a few folks have already chipped in — thanks Konstantin Obenland and Jeff Sebring!

Over the next few months I’ll be posting more about the decisions and discussions we’ve made and had while building Twenty Twelve. At first, these will be a bit backdated, but the posts will slowly catch up as we move along. We’ll also put up a live demo site sometime soon, so you can see Twenty Twelve in action! 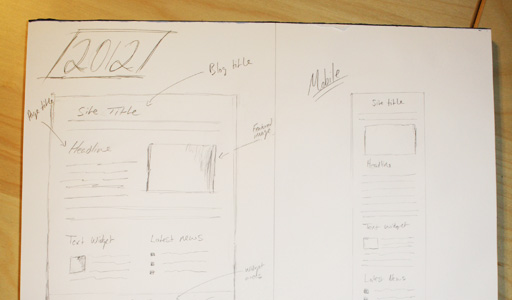 First sketches are a basic overview for the direction of the theme. It’s the first thing I do when I sit down to design a theme. They don’t set anything in stone, but they set the tone and aesthetic for the design. The goal here was to avoid anything fancy, whimsical, or tricky. The focus for the theme will be clean lines, precise spacing, and great typography. Twenty Twelve should be a joy to read. 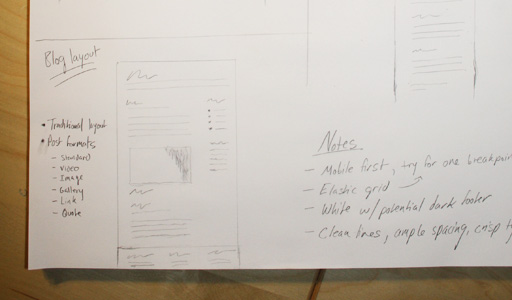 These sketches were completed back in January, and some things have changed since then, but the general look and feel of the theme has stayed the same. In the next few posts we’ll dive a little deeper and take a look at some of the decisions we’ve made so far. Stay tuned!