When I started this journey into WordPress themes in September of 2008 I had no idea it would end up being a full-time gig. It is truly a dream come true. A pet project turned into a successful business I love working on each and every day. Before I talk more about the future lets

turn back the clock… 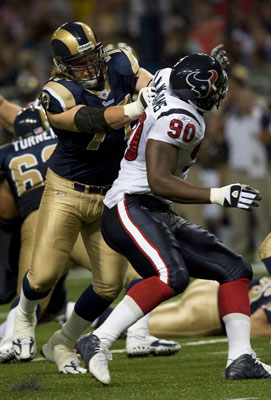 It’s September of 2007. I am released from the St. Louis Rams after a short-lived professional football career (drafted in 2004 by the NY Giants). The writing is on the wall, football is over for me.

It was a great ride, I lived in four cities (New York, Philadelphia, Tampa, St. Louis) and bounced around to five different teams (Giants, Eagles, Bucs, Jets, and Rams). I also watched Super Bowl XXXIX from the sidelines and met some amazing friends along the way.

Contrary to popular belief, journeyman football players like myself don’t make millions of dollars, so I certainly wasn’t walking away with any significant savings. I should also mention it wasn’t easy to give up a game that had defined who I was for such a long time. I truly missed football, it felt like a piece of me was suddenly gone, and it still does feel that way from time to time.

Design was my hobby

During my football career technology and design were my hobbies. I even designed my first theme in 2006, it was called Mint Chocolate Chip. OK, you can stop laughing now. I did it under my full name, Andrew Strojny, to keep it separate from my football life. I also started using WordPress and even wrote a popular tutorial on converting HTML to WordPress. I followed all the well-known designers, guys like Dan Cederholm, Jeffrey Zeldman, and Jon Hicks were (and still are) my heroes.

Now, at the ripe old age of 26, it was time to venture out into “the real world”. It was a little scary, football can be isolating, and you tend to live your football life inside of a bubble.

To start, it was time to move somewhere new. We (my girlfriend, now wife) had been living in a bunch of random cities (not by choice) and decided that we were going to choose a place to live and figure out the job situation once we arrived. To make a long story short, we decided to move to Boise, ID, a small town out west with outdoor activities galore and awesome skiing just 30 minutes away.

We arrived in Boise in mid-November of 2007 and started networking like crazy and hunting for jobs. I had my first job interview over the phone with a local technology company. After that interview I decided, right then and there, I wasn’t going to work for somebody else, hopefully ever. We decided to start our own business and filed the official paperwork. Jestro LLC was born. Why Jestro? My wife’s name is Jennifer and my last name is Strojny. Who needs branding? We’ll just combine our names! We started brainstorming for business ideas and came up with something I thought was going to be the next big thing.

The basic concept: Sell restaurant table space to local businesses in the form of a “table top” display. Give the restaurant a cut of the revenue along with one side of the table top and we take the rest. A win/win/win for everyone. We would even design and print the table top inserts for free! We would later realize the free design and printing was naive on our part, but we were doing whatever we could to close the sale.

We put together a business plan, we bought fancy clothes, we pounded pavement. Every day, rain, snow, or shine, we were out selling advertising. And you know what? The hard work paid off. We were cashing checks, signing up new advertisers, and best of all, we were profitable. We had no overhead and we wouldn’t buy the table top materials until after we made the sale.

No thanks, do you know anyone who does websites?

We kept hearing this question over and over during our pitch. After awhile we started saying, “You’re in luck, we do that too!”. Designing websites was my hobby but I was OK with getting paid to do it. I quickly whipped our website into shape and just like that we were a marketing and design company. We immediately started selling those services as well and now had two sources of revenue.

Everything was starting to click, but those first nine months was the most stressful time of my life (and I am not normally a stressed out type of guy). We were literally hustling to put food on the table and pay rent, and it wasn’t easy. I hardly slept, I was irritable, and worst of all I was constantly worried about failing or (even worse) getting stuck living at home with one of our parents. 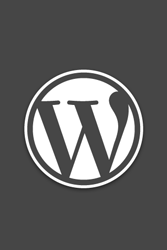 Most of our small business clients needed a website they could manage themselves. After all, they certainly didn’t want to be paying us every time a change needed to be made. I had been using WordPress for our own site and I figured it would be easy enough to teach them how to use it too. It turned out to be a great move. WordPress was a hit with our clients and we started to pick up more referral business. By the summer of 2008 our web business was quietly overtaking table top advertising.

At this point the recession was hitting everyone hard and local businesses were slashing marketing budgets, which was obviously negatively impacting our advertising sales.

I started getting involved in the WordPress community and noticed there was a demand for themes. I honestly wasn’t too impressed with what was out there and I decided to design one myself. On September 12th, 2008 Vigilance 1.0 was released. Little did I know it was destined to be a huge hit and end up being the jumping off point for The Theme Foundry. It started out as a completely free theme, and people would ask me questions in the comments of the demo site. After only a few months we were getting 25 – 50 comments every time I would release a new version. I knew we were onto something.

By the time 2009 rolled around we had completely phased out table top advertising in favor of our web design business. Advertising budgets were drying up and pounding pavement and selling started to feel like a chore. We honestly weren’t very passionate about it anymore. It just didn’t feel right. The web design business was more fun and we had picked up some great clients along the way. Best of all we could work strange hours and go skiing in the middle of the week!

Vigilance was becoming very popular at the beginning of 2009 and the level of support requests I was receiving jumped dramatically. Vigilance was even featured on Mashable and later added to WordPress.com. I was spending a couple hours a day answering theme support questions on our site, and even more time updating and fixing bugs. Then the light bulb went off.

I am pretty sure people would be willing to pay for help and documentation. We are giving away a premium quality theme for free, it seems fair users should pay for support if they need it.

The next week I set up a membership site and on February 10th, 2009 we started selling lifetime “PRO memberships” for $39. Members would get access to a support forum, documentation, and customization tips. We even ran a 50% off special for the first 50 sign-ups (they sold like hotcakes). Before we knew it our “PRO memberships” were starting to become a significant part of our revenue stream (sound familiar?).

The rest of 2009 was a blur. We got engaged, bought a house, released two more themes, set up a dedicated sub-domain (aptly named “Jestro Themes”), and the web design business was absolutely rocking (halfway through the year we were already booked through December!). I was literally working day and night. My routine was: sleep, work, gym, work, food, work, sleep. I was investing a ton of energy and time into our themes and still had to make time for client work.

By the end of 2009 our theme business was taking off and now matching the revenue of our web design business step for step. I slowly noticed my passion starting to dip on client work (I always wanted to work on our themes instead). It was (and still is) so surreal and humbling to have thousands of customers buying and using our stuff. Client work was still fun (sometimes), it just felt like a zero-sum game. I could only work so many hours, and the client always wanted more. Helping our customers and building a community around our themes was so much more fun.

At the start of 2010 we decided to re-brand our themes project as The Theme Foundry and stop taking new client work. It was the best decision we ever made. Shortly thereafter we released Traction (our fourth theme) and re-structured our pricing. We were no longer going to sell all of our themes for one package price, instead we would sell PRO versions of our themes individually. Initially, I was worried it would hurt sales but it actually had the opposite effect. Our offering was now more clear and tangible to the customer and sales skyrocketed. We grandfathered in all of our existing “lifetime” members and made them VIP’s. VIP’s get all of our WordPress themes for free, forever. We made that promise to them when they first took a leap and signed up, and we weren’t going to break it.

To all our VIP’s: You helped get us where we are today and we can’t thank you enough!

The first half of 2010 flew by. Jennifer and I were a married in Costa Rica, we hired our first part-time employee (you’re the man Yan!), and I spoke at my first conference earlier this year.

Back to the present. Today I am announcing we are officially going full time on The Theme Foundry and have closed down jestro.com for the foreseeable future. I am currently working hard on a new photography theme to be released later this month and one of my heroes I mentioned earlier, Jon Hicks, will be designing a new theme for us this summer! We also will most likely release at least two more themes by the end of this year.

To infinity and beyond!

We are officially “in to win it”, and now is a perfect time to talk about my vision for The Theme Foundry. We will stay laser focused on three simple core values:

Thanks to each and every one of our members. You have made this whole ride possible, and we love you!